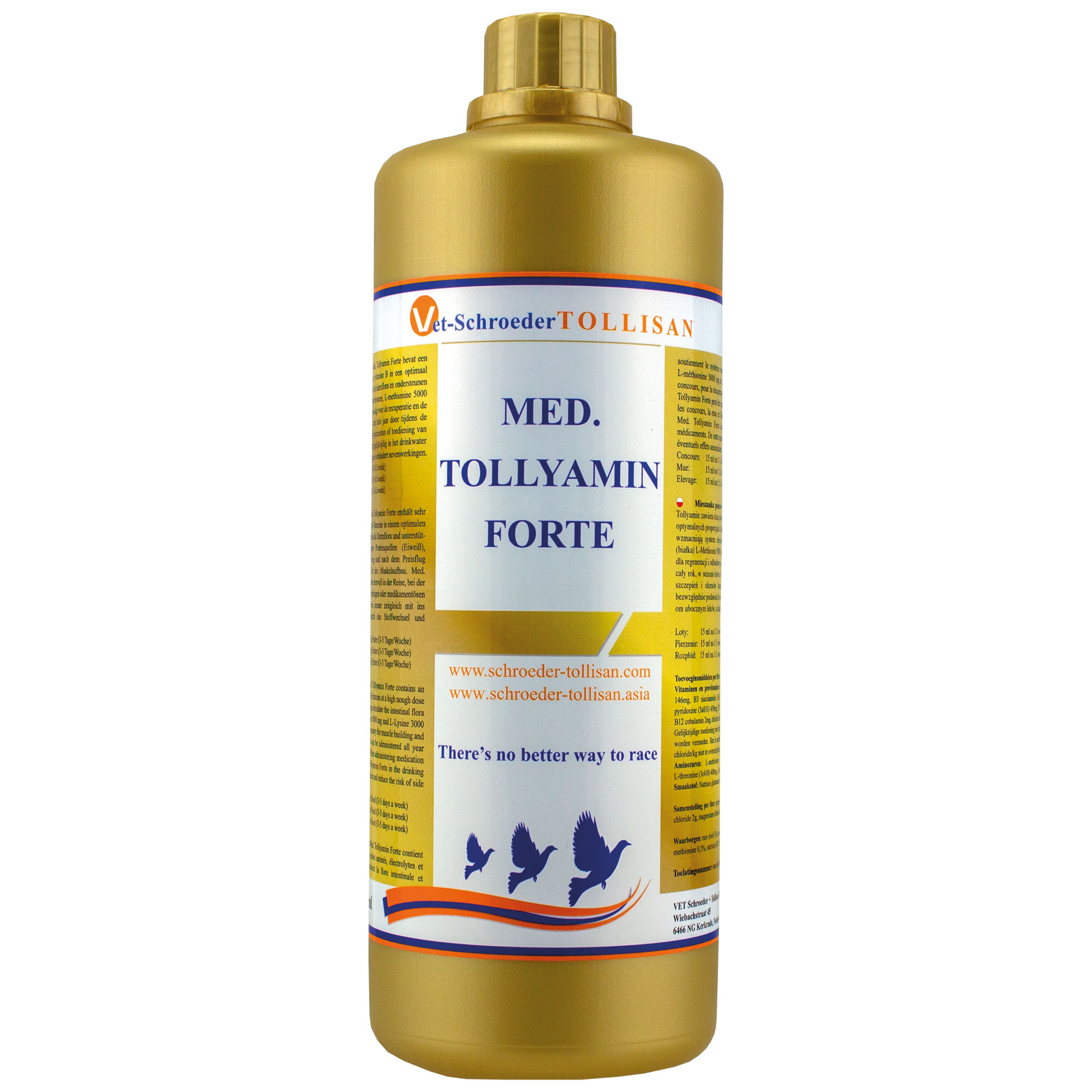 Tollyamin contains high doses of amino acids, electrolytes and B vitamins in an optimized mixture ratio. Because of its composition you can utilize Tollyamin all year round, during the racing season, when breeding and during the moult.

Tollyamin contains high doses of amino acids, electrolytes and B vitamins in an optimized mixture ratio. Because of its composition you can utilize Tollyamin all year round, during the racing season, when breeding and during the moult.

During the breeding season you can cater for the particularly high protein needs of the young pigeons with 3+ Tollyamin Light. In addition, with choline chloride the growth of young pigeons is provably promoted. Studies from the poultry industry have provided the definite proof of this. Choline influences the metabolism positively and hinders o fatty degeneration of the liver.

During the moult we recommend the daily dispensing of 3+ Tollyamin Light in combination with Dosto-Oregano Liquid 12%. Because plumage grows each and every day, not just once a week. The highly dosed amino acids L-methionine, L-lysine and the vitamin Biotin are the guarantors for a new and silky plumage. Due to the sulphur contained in L-methionine, after a few hours a slight sulphur smell arises from the drinking water. If you have purchased amino acid products that do not smell of sulfur, you have bought a lot of water. They do not have any odors, but also no effect! I hope you understand what I mean.

With vaccinations or other medical treatments always provide Med. Tollyamin Forte in the drinking water at the same time. In this way you can avoid side effects from the medications and also plumage damage. The highly dosed vitamin B-12 supports blood formation and cell division. This process is very important for a vigorous. During the racing season supplementing the diet with Med. Tollyamin Forte is essential. Glutamine, L-methionine and L-lysine are of central consequence as protein building blocks (organic compounds) for a quick post-race recuperation.

The muscle and weight loss can be felt on the pigeons after a race. The harder the race – the lighter the pigeon. Pigeons provided with Med. Tollyamin Forte and Immunol make up the muscle and weight loss much faster. The energy storage build-up of the muscles is accomplished in two days. Pigeons with this specialized care have an enormous advantage in the course of a long racing season. The longer and harder the racing season, the greater the advantage. Glutamine plays a key role in many of the livers detoxification processes. The liver is one of the most important organs in a racing pigeon’s body. High-fat feeds before races, burning of fat and protein during a race, muscle regeneration after a race and the provision of medications – all of this passes through the liver. It is for this reason that the protective effect of Tollyamin is so very important for the liver of your racing pigeons.

Why is it better that L-methionine is contained in Tollyamin and not just, as in all other products, DL-methionine?

Nature knows only the L-form, but not the D-form. Therefore, the body can only exploit L-methionine and must discharge the D-methionine unused. Thus, 50% of the methionine is lost. That means: If you buy a product with 1000 mg of DL-methionine, only 500 mg of methionine, this valuable amino acid, remains for the pigeon.

The secret of flavourings In nutritional supplements and medicines flavourings are now being used more frequently. These flavourings are one of the secrets of Med. Tollyamin Forte. They make the products palatable and also have a positive effect on the mucosa in the beak/throat and also protect the gastrointestinal tract. A healthy flora can only settle on an intact intestinal mucosa.

It is a useful exercise for every pigeon fancier to familiarise themselves with one of the most important substances available for racing pigeons – amino acids. One would then quickly discover that Tollyamin is an exceptional product, or, in other words:

Additives per 1000ml vitamins and provitamins:

Close the packaging well after opening!